St. Mary's Gig Club was formed from the Isles of Scilly Gig Rowing Association in 2008, with approximately 80 members and growing, this website will hopefully keep everyone up-to-date with news, stories, events, photos, fundraising, race results and more...

If you are on facebook it is the best way to keep up to date with what is happening and what needs to be done before and during the season. Take a look and 'like' it if you're a member, a fellow gig rower, a fan or just interested!
Posted by Andrew at 15:13 No comments:


Tregarthen’s Hotel on St Mary’s in the Isles of Scilly is following up its recently completed £400,000 refurbishment with further investment in a new hand crafted gig.

Director Trevor Richards says: “To safeguard the future, you have to invest in it and pilot gig racing is a treasured part of the heritage of the Isles of Scilly.”

The World Pilot Gig Championships take place on the islands this coming weekend 29th April – 2nd May and gig racing takes place twice a week throughout the season on the islands.

The new gig, to be called Tregarthen’s, will be built by local island craftsman, Peter Martin. It will replace the hotel’s previous gig, which was donated to the islands in 1999 to celebrate the hotel’s 150th anniversary, and which will make its swan song at this year’s World Championships.

The new gig will take five or six months to build and will be ready in time for the World Pilot Gig Championships 2012.

Jeff Marston, Chairman of Island Marketing, says: “At this time of cutbacks, it is great to see continued investment in the islands’ traditional sport and I am pleased that Tregarthen’s have decided to ‘buy local, helping support the local economy.”

Trevor adds: “With the Olympics, 2012 will be a big year for sport in the UK and in our own small way we want to contribute to the future of sport on the islands and celebrate the islands’ unique sporting heritage.
Posted by Unknown at 22:42 No comments: 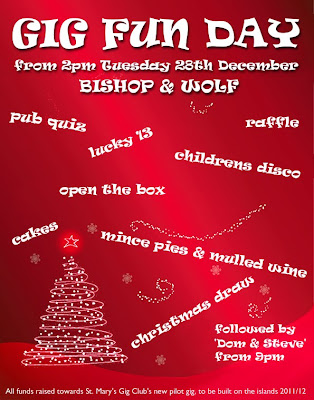 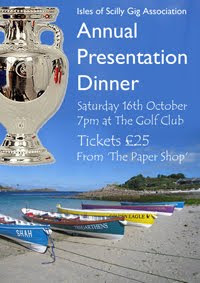 BEACH PARTY: Celebrating 180 years of the Bonnet and Slippen 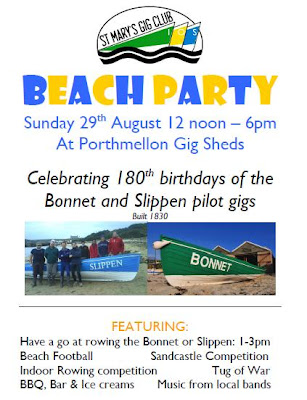